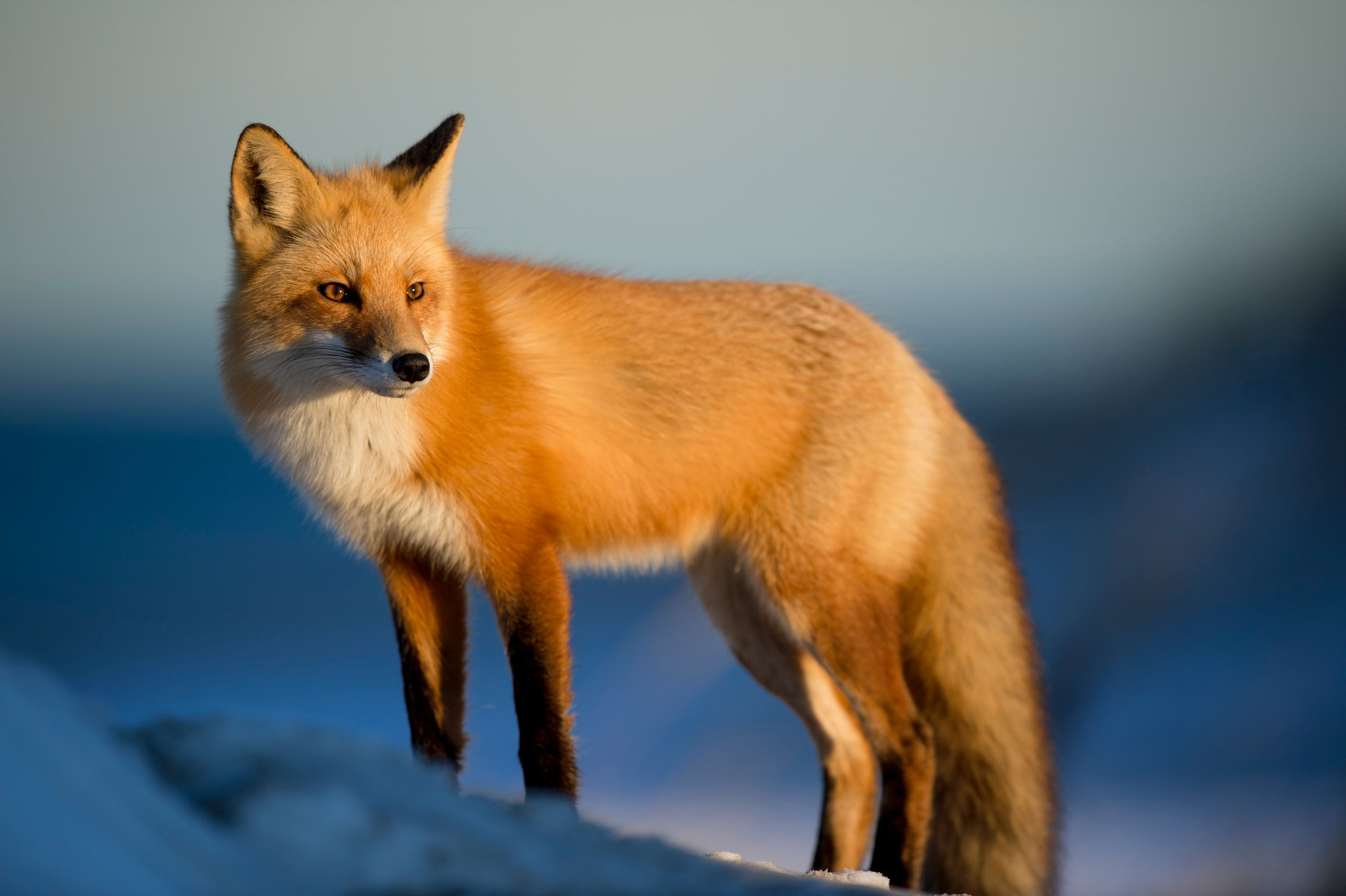 The light-colored male red fox walked slowly, ears erect, eyes focused intently on something hidden beneath the snow. Stopping, it brought it’s hind legs forward underneath it, then stood motionless as it listened and stared. It’s hindquarters slowly lowered into a crouch position until almost touching the snow. The fox, frozen, waited and stared. Rocket-like, the fox launched itself straight up into the air, inverting like a springboard diver it plunged its face and forepaws deep into the soft April snow. Lifting its head its mouth came up empty. Then he walked slowly forward again, listened, stared, then again stopped, waited, and lowered one more time. After crouching motionless for several minutes, it again launched like a rocket and drove its mouth and forepaws deep into the snow. This time it emerged with a small meadow vole in its mouth. It trotted a short distance, dug through the snow and grabbed a mouthful of grass. It then carried the combined mass a short distance, dug another hole in the snow, gently placed its booty in the hole and with its forepaws covered the small mammal and grass with snow. It then started walking slowly through the snowfield again, listening intently, and starting the hunt one more time. Once again its walk slowed, then stopped, and with that same intense concentration lowered into a crouching position ready to spring.

Red foxes, as small members of the dog family, weigh only 10 to 15 pounds. They vary in color from black to bright red. This one had long black legs with light-colored red fur over the rest of its body. It displayed the identifying characteristic of a white tip on the end of its long fluffy tail. Red foxes feed mainly on small mammals during the cold winter months and expand their diet to include berries, insects, frogs and birds during the summer. Meadow voles, deer mice, pocket gophers, rabbits and hares are active all winter and make up much of the diet of red foxes in this part of Idaho, although they may occasionally come across a fish carcass frozen in the ice of a nearby lake or pond. The warm spring temperatures have reduced winter snow in the meadows to a few large patches of soft mush, although deeper snow, still mostly frozen, exists under the shade of forest trees. Meadow voles and pocket gophers live beneath the snow all winter and when the snow is crusty and deep present a difficult challenge to a hungry red fox. Spring thaws render shallower snow much more easily penetrable making this a time of food abundance for the enterprising predator. Although red foxes tend to be more active at night, the warm sun of spring afternoons makes hunting for pocket gophers and meadow voles especially profitable.

Launching itself again, the fox came up with a fat pocket gopher. After taking just a few steps, it lowered this prize and left it lying on the snow and soon began hunting once more. Again the fox secured a second pocket gopher. Immediately, the red fox focused again, staring, ears erect and pointed forward toward the snow a few feet in front of it. Dropping the last caught pocket gopher, its hind feet moved forward, rear end lowered into a crouch, then stood statue-like for several minutes. An explosive leap into the air and the red fox plunged his face and forepaws deep into the snow. Standing victorious he held a third pocket gopher in his mouth.

Northern pocket gophers are medium-sized rodents with bodies ranging from 5 to 6.5 inches long plus a modest tail of 2 to 3 inches. Males tend to be larger than females, both colored grayish brown they weigh 2.5 to 4.5 ounces. They breed during the spring of each year and produce one litter of 4 to 7 young. They usually live in open grassy prairies, alpine meadows, bushy areas, and open pine forest. This red fox found a healthy colony of pocket gophers in a sagebrush meadow about 100 yards from the forest edge. Pocket gophers dig actively all year building tunnels underground and depositing tailings in small piles above ground in summer. During winter they tunnel through the snow and then fill their snow tunnels with soil from their underground excavations. Long, serpentine 2-inch diameter cores of soil visible soon after snow melt evidence pocket gopher activity. Tube-shaped bodies, small eyes and ears, short smooth fur, and large wide front feet provide the perfect shape for the furry miners. They eat the roots of grasses and other non-woody plants. Their digging habits help moisture soak into the ground and reduce soil erosion. Unfortunately, they often become agricultural and garden pests because of their tunneling and fondness for eating roots.

The red fox picked up his two last captures and headed east. Walking rapidly he ignored our car as we followed from a distance. He ducked through a log fence, and then well ahead of us crossed the road and slipped into an open forest of aspen trees. He continued to parallel the road for about a half-mile, then turned abruptly and headed into the dense conifer forest and out of sight. Wanting not to disturb him, we chose not to follow.

I suspect our red friend transported a well-appreciated meal to a family in those trees. A red fox vixen, or female, births 4 to 9 pups in the security of a shallow den during March or April, often in a well secluded location. The male typically brings her food while she tends to the pups for the first few days after birth. After that both will hunt and bring food to the pubs. The pups remain in the den for the first month before emerging to play and feed. Pups wean at 2 months and by fall travel and live on their own after a summer of intensive training by their parents.